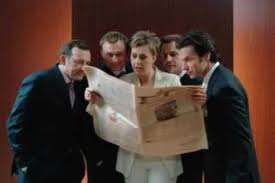 There are many questions every writer faces as they write their stories and usually one of those questions is "How big a role will the outside world play in my plot?" All of our characters live in our made-up world, but unless you write in a genre like science fiction or fantasy, real-life events have to be incorporated or ignored.
Many authors have history play a vital role - it would be difficult to find a modern-day spy thriller that doesn't take the war against terrorism into account. On the other hand, if you're the writer of lighter fiction, it's possible that the only role the real world plays in your manuscripts is that your characters carry smart phones and perhaps tweet to their friends or discover their love life is falling apart because of someone's status update on Facebook.
My manuscript's plot takes place in the past which gives me the advantage of knowing how and when events played out. Although my characters are aware of their world, I have not made them main players in it. I don't have Winston Churchill as a character (although he is mentioned in a passing conversation). All my characters, however, have attitudes coloured by the experience of living through World War I as it would be (in my opinion) impossible to write true-to-life characters without taking that into account.
However, they (like us) don't know what will happen next week, next year or tomorrow. We learn from looking backwards since we can't look ahead. A seemingly insignificant event today could be charged with meaning a year later.
If you're a writer, how big a role does the outside world play in your formulation of your plots? And if you're a reader, do you want real-time events to be echoed in your reading, or do you want simply to escape into simpler plots where the outside world plays little or no role?
Posted by Elspeth Futcher at 8:59 AM