6 - 10 Guests (including Host)
Once upon a time, in a land far, far away, there were princesses, evil queens, a handsome prince, a friar, a farm girl, a legendary detective, a doctor and...a murderer. Welcome to A Fatal Fairy Tale - the game of what happened one dark and stormy night in the land of happily ever after. Leap into the magical world of fairy tales and discover if you and your guests can solve this Fatal Fairy Tale. Goldilocks has been poisoned by a bowl of porridge that was definitely NOT 'just right'. Which of these ten famous literary characters is the guilty party?

Everyone loves Melissa Martin.  And why not?  She's the most popular teen pop-star singing sensation with 2 hit CDs and she just finished starring in her first movie!  She's got everything a girl could wish for and she's surrounded by friends.

Yesterday Melissa sent a note to her closest friends telling them to meet her tonight at her family's Malibu hide-away. But when one of her friends arrived this morning for a scheduled meeting she discovered Melissa's body lying on her bedroom floor...dead.

She has gathered together everyone who received Melissa's note in order to solve the mystery. Obviously, Melissa wasn't loved by everyone after all.

Melissa Martin (half of the famous Martin twins) has been murdered. Set in Malibu, this is a great game for teenage (or almost teenage) girls at a birthday party or sleepover. 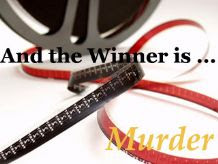 
Columbus Studios is throwing a party to celebrate their blockbuster hit "Back When I Loved You" and you are invited!

Unfortunately, the big celebration goes disastrously wrong when one of the guests dies after drinking a glass of champagne.  The murderer must be one of those present in the room who include two stars of the film, the movie's director, producer, costume designer and the studio's public relations manager... one of these people couldn't wait until tomorrow night for their dreams to come true.

This game has the same characters as the scripted large-group mystery of the same name with the same victim, but a different murderer. Partially scripted clues make this game perfect for first-timers.

An evening of murder and movie intrigue loosely based on the scripted game of the same name. Show business can be deadly! 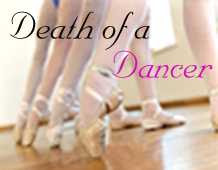 6-7 Guests
Have you ever dreamed about being a dancer - either on Broadway or in a ballet company?  Here's your chance to live your dream for an evening. Chelsea Walker is living every young girl's dream - she's about to graduate from the City Performing Arts School and her career as a professional dancer stretches before her.  But after the students' final rehearsal for their last school performance, Chelsea has been found dead.  This is the worst possible time for the rest of the students because tonight is their final recital - the night their futures are decided.  Taylor Moore, the girls' classical dance teacher has gathered the girls who lived on the same floor in the school dorm together in order to solve Chelsea's murder quickly before the news gets out and ruins the school's recital.

Any peforming arts school is full of rivalries and jealousies.  But who could feel desperate enough to kill?

The perfect mystery game for anyone who used to dream (or still secretly does) of being a dancer.  A fun game for teen (or almost) teenage girls at a birthday or sleepover party. 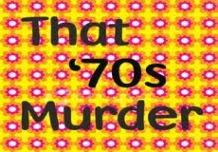 It's time to put on that leisure suit, bellbottoms, platform shoes and grab your mood ring as you and your guests solve "That '70s Murder". Big-time record producer 'Rockin' Roland has been found dead during his party in his hip Malibu beach house.

Your guests will have fun answering '70s trivia questions, dancing to '70s music as well as trying to solve "That '70's Murder". Can you dig it?  Far out!!

It's the coolest party of the decade with dancing, good times, a trivia challenge...and a murder! 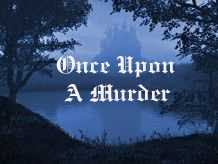 In a land not too far away (maybe even closer that you think), a group of somewhat familiar characters gather to solve a mystery.  The leader of the group, Jack Hill, noted mountain climber and carrier of pails has been murdered...drowned in a pail of water.  Pinned to his body is a frightening note.  His friends include Beau (the girl who loves her pet sheep), Scarlett (who wears a red hood and brings snacks in a basket), Cindy (who must be home by 12:00), Jill (his pail carrying companion), Miss Muffy Moffett (who loves cottage cheese), Ryan Arachnid (spider specialist) Thomas Wolfe, (the newcomer) and John Horner (the shy pie-lover).

These friends must solve the mystery quickly before another of their company falls out.  They all know the old song "so they all rolled over and one fell out...there were 8 in the bed and the little one said..."

Jack, the famous hill climber and pail carrier has been drowned in a pail of water. Sometimes 'once upon a time' does not end 'happily ever after'.  A fun party suited to everyone from 12 up to 102! 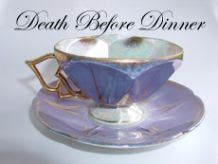 6 - 8 Guests (including Host)
Here's a chance for you and your guests to play a classic whodunnit...full of twists and fun.

It had been planned as an intimate dinner party for eight.  Lady Fanny's guest list was small, but all were members of society:  Hon. and Mrs. Charles Ruskin (Lord and Lady Ruskin's son and daughter-in-law), The Duke and Duchess of Wollingford (Lady Fanny's sister and brother-in-law), Captain and Mrs. Middleton (long-time friends of Lord and Lady Ruskin) and Lady Fanny and her husband Baron Ruskin. Fanny had planned for everything...except for the discovery of a very dead body just before she, her husband and her guests were about to sit down to dinner.

With fully scripted clues and recipe suggestions for a Regency meal this is the perfect chance for first-time mystery players to have an elegant yet mysterious evening!

Traditionally, it's always the butler who did it.  It can't be the butler this time - he's the one who's dead! This puzzling mystery is set at an English Regency country manor. 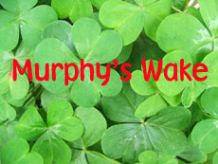 Patrick Murphy was the most popular man in town - he owned the highly successful town pub, was a large contributor to the parish charities, and came home every night to his lovely and devoted wife.  Last week he was killed coming home late from his pub.  At first, everyone thought it was a tragic accident...but now at his wake, it is very clear that Patrick was NOT the most popular man in town...and that his murderer is present at Murphy's wake...

Fully scripted clues give you and your guests the chance to use your best Irish accents as you play the game. 'Tis a fine way to spend an evening!

Who would want to kill popular tavern owner Patrick Murphy?  Attend "Murphy's Wake" and find out! 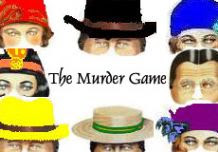 Was it Blackie Knight in the Music Room?  Was it Rusty Foxe in the Picture Gallery?  Or was it Skye Blue in the Wine Cellar?  Sound familiar?  Here's the chance for you and your guests to play this classic whodunnit of who, where, and why for you set in a mysterious grand home during the "Roaring '20s."

As each round of the game is played everyone (if they ask the right questions) can detect the where (there are 8 rooms), the who (8 suspects) and the why (8 different motives) of this most intriguing murder.

Who would kill Ann Nonomus? And where?  And why?  Play "The Murder Game" and find out! 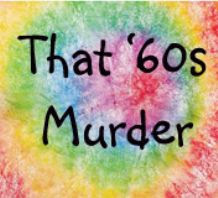 8 - 14 Guests (including Host)
Hey man, come and spend some time at the Happy Earth Commune where there's peace, love...and murder. (what a bummer)

Big Daddy has gathered everyone together to groove to some tunes and peace out in each other's company.  Poisoned tofu?  Who'd have guessed?

That '60s Murder is a light, fun mystery including a Dance Groove-Off and Trivia Challenge.  Can you think of a groovier way to spend an evening?

It's the hippest way to celebrate the '60s - dancing, trivia and solving a strange murder! 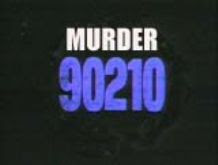 Tonight is a surprise party for Shannon- the most popular girl at the exclusive girls' school The Hills Academy.  All her closest friends have been invited for an evening of fun.  Unfortunately, the surprise is that someone at the party just murdered Shannon!

Who would want to kill the most popular girl in school? The girl who was just elected The Hills Ambassador to the National Schools Conference?  The real question is who didn't?

It's a fun evening of clues and a trivia challenge as you and your friends become students at The Hills Academy and solve "MURDER 90210".


An all-girl party perfect for a birthday or sleep-over, this is a mystery (and trivia contest) for everyone to enjoy! 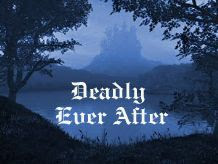 8 - 14 Guests (including host)
What happens when 'happily ever after' becomes 'deadly ever after'? Someone has poisoned Scheherazade.  Who could be the guilty party?  Could it be Hamlet?  John Silver?  Snow White?  Juliet?  Or someone else?

Fun clues and a trivia challenge (how well do you know all these stories?) will provide you and your guests with an entertaining evening that will be talked about for weeks!

Cast of 9; 30+ Guests
Could anything be more exciting than the Academy Awards?  This mystery takes place on the night before the big night during the private party that Columbus Studios is throwing to celebrate their 7 nominations including "Best Picture" for the studio's blockbuster hit "Back When I Loved You".

Your guests will meet the three stars of the film,(all nominated), the director, the producer, the costume designer and the public relations manager. Anyone would think that on a night such as this everyone would get along.  But someone isn't waiting until tomorrow night for their dreams to come true.

A fond, funny and sometimes irreverent look at the movie business, this is a scripted dinner-theatre type presentation running approximately 1 1/2 hours that gives everyone a chance to live the life of a Hollywood star!

A scripted play that takes place at a private party the night before the Academy Awards.  Show business can be deadly! 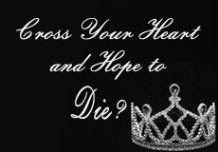 Cast of 7 - Guests from 30 - 200
This is it!  It's Fairfield High's big prom night and everyone is ready to celebrate.  The whole class of 1959 is here including the cheerleader and her football-star boyfriend, the class rebel and his current fling as well as the class bookworm. But appearances can be deceiving.  Someone here is not as nice as someone in their position in the school should be.  In fact, someone here has many enemies - all well deserved.  Prom night is supposed to be one the happiest nights in anyone's life...but for someone present this is their last night alive.

Filled with humor and a healthy amount of teen-lingo (1950s style) this is the chance for everyone to laugh as well as solve the mystery.  Get your cast together and put on a play!

This scripted mystery play with a "Grease"-like feeling is set at the Graduation Prom at Fairfield High in 1959.

All these games are available at http://www.host-party.com