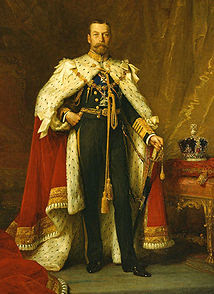 He was born on June 3, 1865 and christened George Frederick Ernest Albert.
He was the second son of Edward and Alexandra, the Prince and Princess of Wales and was third in the line for the throne. (first was his father, second was his older brother Prince Albert Victor)
He and his older brother were sent to join the Naval Cadet school when George was 12 in 1977. He would remain in the Navy until 1891.
He was the 'good' son; well-behaved and quiet. His elder brother was the opposite; wild and uncontrollable.
When Prince Albert (known in the family as 'Eddy') died in 1891, he had been engaged to Princess May of Teck. Queen Victoria believed she would make an excellent consort and so George became engaged to her in May 1893 and their wedding was two months later. George and Mary's wedding portrait, 1893.
They would have 6 children: Prince Edward, Prince Albert, Princess Mary, Prince Henry, Prince George and Prince John. Prince John would die at the age of 14 from epilepsy. 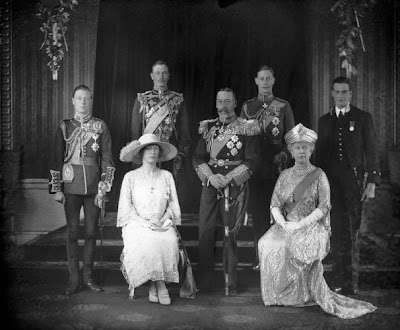 1923
Standing from left to right: The Prince of Wales (later the Duke of Windsor), Prince Harry, Duke of Gloucester, King George V, The Duke of York (later George VI), Prince George, the Duke of Kent.
Sitting: Princess Mary (the Princess Royal), Queen Mary.
When his father became King in 1901 upon Victoria's death, George and May (now known as Mary) became Prince and Princess of Wales.
They became King and Queen in 1910. 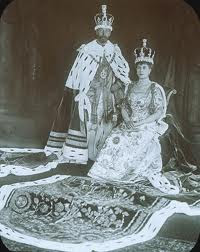 Thanks to Queen Victoria's many children, he was related to most of the European Royal families. When World War I was declared, George was declaring war on his nephew the Kaiser.
He never forgave himself for being unable to save his cousin Nicholas and his wife Alexandra from their fate during the Russian Revolution. He had met them both several times. He and Nicholas looked incredibly alike. 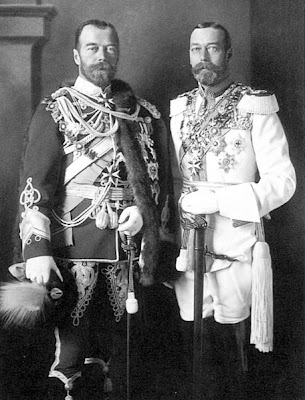 Tsar Nicholas II is on the left, King George V is on the right.
He hated traveling abroad. His favourite pastimes were collecting stamps or shooting parties.
Today is the 75th anniversary of his death: he died January 20, 1936. It was discovered many years later that his death was 'helped along' by his physician.
Posted by Elspeth Futcher at 9:52 AM