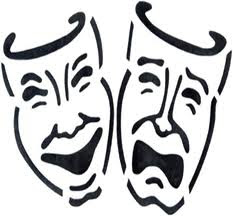 Last night I got together with a few of the actors who used to be in my theatre company because I've been asked to put on a murder mystery night at our local theatre. I had prepared outlines of everyone's character and described the setting. I went in knowing the basic plot.
Think of it as having a first draft.
After the meeting, it's like having a second or third draft.
Characters are deeper and thus have multiple motivations. Interpersonal relationships have become far more complex. Histories of characters have been expanded.
Oh, and the victim changed.
These murder mystery nights are always a group effort, but it was a nice reminder how fresh eyes see characters and events in different ways. It also reminded me not to think the plot is carved in stone at the beginning of the writing process. No evolution makes for a stalled and dull manuscript.
Remember to listen to all of your main characters. It's possible they're right and you're wrong. Being open to all possibilities can only improve your story.
And laughter makes everything better.
Posted by Elspeth Futcher at 9:42 AM