Freedom in a Box 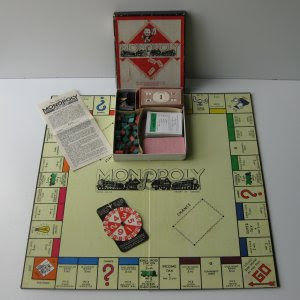 As many of you know, my WiP takes place in pre-WWII England. The books I hope will follow, will take place during the war. In the course of doing the necessary research, I've come across some interesting historical tidbits...here's one which will make you want to re-look at that Monopoly game languishing in the back of a closet.

From 1941 onwards, as more and more Allied pilots and airmen became reluctant guests of the Third Reich, the RAF spent some time dreaming up ways to help these captured men and aid their escapes. The most obvious need was for a map showing the locations of 'safe houses' where an escapee could expect to receive food and shelter. It was decided to print these vital escape maps on silk, since paper maps make noise as they are unfolded and refolded and turn into mush when they come in contact with water. Silk maps could be crunched into tiny balls and unfolded silently.

In 1941, the only company in Great Britain that had perfected printing on silk was John Waddington, Ltd., the same company that held the UK rights to the Monopoly board game.Objects coming under the term 'games and pastimes' were part of the CARE packages distributed by the Red Cross to all prisoners of war.

Under the strictest security and secrecy, a select group of Waddington employees began producing silk escape maps keyed to each region of Europe where POW camps were located. These maps were then hidden inside Monopoly playing pieces.These games also included a token containing a small magnetic compass and another containing a two-part metal file. Hidden in the Monopoly money were amounts of genuine high-denomination German, Italian and French currency.

Before taking off on their first mission, all Allied air-crews were told how to identify these particular Monopoly sets. There was a tiny red dot - looking like a printing glitch - in a corner of the Free Parking square. It is estimated that one-third of all Allied POWS successful escapes were helped by these Monopoly games.

Posted by Elspeth Futcher at 9:24 AM