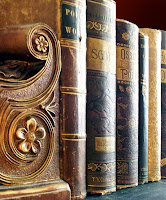 There must be something in the air, because book lists are popping up everywhere faster than weeds in my garden. A brief sampling include:
1. Books You Must Read
2. 100 Novels Everyone Should Read
3. 1001 Books You Must Read Before You Die
4. 101 Best Books Ever Written
and one I'm a touch too late for:
5. 1001 Children's Books You Must Read Before You Grow Up
Excepting the latter, there are several books which appear on all the lists - some of which I have read, and many many of which I haven't. I'm going to make a confession.
Seriously.
Right now.
I've never read Heart of Darkness by Joseph Conrad.
Not once.
Now, I tried. I tried many, many times. I had it assigned to me in several different English Lit classes at university. I couldn't do it. Couldn't get beyond page 7.
However, I listened to my professors and took copious notes. I could and did write essays and exam questions about Mr. Conrad's classic. I just never read it.
I never will.
Nor have I ever seen Apocalypse Now. Why? Think about it for a second. What book was it based on? There ya go.
Time for your guilty confessions. What classic have you never read?
Don't leave me standing here all alone.
Posted by Elspeth Futcher at 9:17 AM