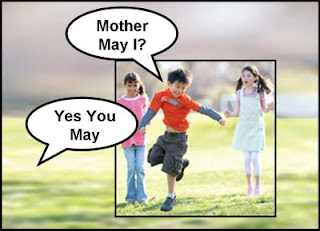 When I was young, one of our favourite games to play at recess was "Mother, May I". This involved one person being picked as 'Mother' and all the other players lining up a distance away. You moved forward by asking if you could take 'one tiny step' or 'two giant steps' forward. 'Mother' would agree or not - or tell you what she wanted you to do. The object of the game, of course, was to be the first to reach 'Mother'.
Faster was better.
However, in my manuscript, I've discovered faster isn't necessarily better. I have a tendency for things to happen too fast - for there to be huge leaps of progress. As I go back through it, I'm breaking some of these giant leaps down into tinier steps. My detective team is clever - but they're not super-human.
I'm allowing them to make mistakes and to perhaps judge before they have all the information. I'm allowing personal prejudices to play a part in their decision making. I'm giving my other characters free reign to throw the accusations of guilt on each other.
Tiny steps - some forward, some backward.
I'm keeping some of the giant steps because breakthroughs do happen in life. One small piece of the puzzle can make an entire section come together. But I do have to keep reminding myself that sometimes, slower is better.
After all, this is a novel - not a short story.
Posted by Elspeth Futcher at 9:33 AM