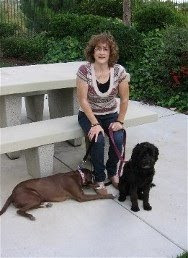 I'm thrilled to welcome my very first guest post by the astounding Margot Kinberg. Margot's blog, Confessions of a Mystery Novelist is a wonderful site crammed full of Margot's encyclopedic knowledge of the crime fiction genre. If you haven't visited, please do. Margot is also the author of two mystery novels, her latest being B-Very Flat.

Thanks very much, Elspeth, for hosting me. You’re very hospitable : ). Writing is actually a dangerous thing to do. Oh, not because of any real physical danger (that is, unless you’re writing while driving or operating heavy machinery). No, it’s those writing demons. They appear from what seems to be out of nowhere, and they attack when you least expect it. So if you’re going to be safe out there as a writer, it’s as well to have some ways to deal with those demons. Here are a few writing demons I’ve faced.

The “No Time to Write” Demon

This is a particularly powerful demon for people like me who have “day jobs.” Like a lot of writers, I work full-time. And then there are family obligations, pets, and, oh, yeah, little things like laundry, food and bills. It’s not easy to set aside large blocks of time to write. So I don’t. I wish I could, but that’s not my real life. And even if I do set aside, say, an entire afternoon for writing, that’s almost always when the dog gets sick, the computer crashes or I blow a tire.

Instead, I write in small dollops of time. Even fifteen minutes is enough to sketch a scene, write some dialogue or start planning a chapter. It’s not much, and sometimes, I’m happy to even have fifteen minutes. But it’s something.

I also try to plan time to write. Again, not easy. But I’ve found that if I promise myself that hour after dinner, or that hour in the morning before anyone else is awake, I’m more likely to get it done than I am if I just say, “Gee, I’d really like to get some writing in today.”

I’ve found that it works best for me to be realistic about how much I can write at one time. It means my work doesn’t go as quickly as I’d like, but it also means I don’t punish myself unduly when it doesn’t.

The “I’m Not Making Any Progress” Demon

This one’s related to the first demon. They often visit me together. Most of us would like to make much more progress, much more quickly than we do. I know I would. But really, what do we mean by, “progress?” How do we measure it? For me, that’s the key to dealing with the fact that my work isn’t going as quickly as I’d like.

I consider it progress when I write even one more sentence than I had. I know that may be a nice, juicy rationalization, but it is helpful on those days when I’m convinced I’m never going to get my manuscript done. I even congratulate myself when I go through what I have written and catch and fix some stupid mistakes I’ve made. That’s progress, too.

The “I Can’t Think of What to Write” Demon

Creativity isn’t like gasoline, where you can just fill up when you’re low on fuel. It’s a most fickle muse that always shows up when you aren’t prepared, and has the bad taste to send you to voice-mail when you most need it. When I’ve set aside time to write, but the muse is stubbornly silent, one thing I do is reread what I’ve written. I can make revisions, feel proud if I like what I’ve written, and feel smug that I’m actually writing. Sometimes I even see the muse peeking out at me as I re-read, and I can get going on new parts of the manuscript.

Another way that I cope with this particular demon is work on other aspects of the story (character names, physical descriptions, settings and so on). I work on my story frame, too. That way, I’ve still used my time productively even when the muse is looking over someone else’s shoulder.

Sometimes, I get a visit from the muse when I’m in a meeting, driving, eating dinner or cleaning up. Even Agatha Christie said that the best time to plan a story is when you’re doing the dishes. When that happens, the last thing I want to do is turn away Madame Muse with no acknowledgment. So if I can, I make a note to myself on an adhesive note or even an envelope. I’ve even been thinking of getting one of those voice recorders, so I can record ideas while I drive. My ‘cell ‘phone’s got a recorder, and I do use that once in a while, but it doesn’t allow for long recordings, so if I use it, I have to keep it brief. If I’m with someone when I get an idea, I ask her or him to remind me of it: “When we get to _____, remind me to write that down, OK? I wanna use it in my book.” Most people are really flattered to be a part of the writing process.

The “Help, My Story’s Fallen and It Can’t Get Up” Demon

Writing a high-quality story is not an easy thing to do. I don’t know of anyone who can do that the first time without any revisions, changes or re-thinks. If I did I would be convinced that writer wasn’t really a human. When my story lies writhing in agony, begging for mercy, I usually do one of a couple of things (that is, once I’ve realized it’s going no-where).

I often get really helpful ideas from others’ writing. So I read. A lot. Sometimes, I’ll be inspired by something I’ve read, and that gives me a whole new twist on my own writing. In fact, that’s what’s happened with the book I’m working on right now. The plot needed work, and I got what I think is a very good idea from another book I read, so I’ve gone back and re-worked the story. I think it made a big, positive difference.

Another source of help for me when my story flounders is that I talk about it with my family and friends. I tell them about the story (OK, not the spoilers, but the basic gist) and get ideas from them. I don’t use everything they tell me, but often, I get helpful insights.

I’ve also learned to be unafraid of making major changes – even going back and starting all over. Sometimes, a story stalls because it was wrong from the beginning. I think writers have to be willing to let their stories go if they’re simply not going to work. That’s easier to say than do, because we do get attached to our stories. But sometimes, it’s necessary.

This one is a tough one, because we can all think of writers whom we see as more talented, more prolific, or more successful. I know I can reel off a list of names without any effort at all. That’s especially true of writers who haven’t had their work published yet. So what does a writer do to keep the faith?

I think the answer to that question is different for everyone. For me, a few things help. One is that I have a very supportive family – I love that about them. I also have some wonderful beta-readers who have faith in me. They tell me when my writing needs work, but they are also members of my “cheering squad.” I’ve also got a group of writer friends (many of whom I’ve never even met in person : ) ) who are going through the same things that I am. That helps. I get a lot of support and help and so many terrific ideas from other writers.

Another thing that helps me is that I keep a blog. When people are nice enough to comment on a blog, that’s a helpful reminder that you have something worth saying. Blogs are also useful ways to connect with other writers, to share your own ideas and (let’s be really pragmatic here) to build interest in your own writing.

There are other writing demons, of course; I’m sure you have your own. What demons have you faced? What do you do about them?

Again, my thanks, Elspeth, for having me. And the wine and chocolate were scrumptious. I promise I threw the wrappers away.

Is anyone really safe? Not necessarily. At nineteen years old, Serena Brinkman, an undergraduate violin major at Tilton University, seems to have a very secure future; she's got good looks, money, people who love her, and rare musical talent. She's also got a coveted Amati violin, a musical rival, friends whose secrets she knows, and an obsessed fan.

Serena's dreams are shattered when she suddenly dies on the night of a major music competition. Serena's partner, sure that her death was not an accident, asks for help from Dr. Joel Williams of Tilton's Department of Criminal Justice.

Williams, a former detective, becomes convinced that Serena was murdered, when he learns how unsafe her world really was. As he works with the Tilton Police Department to uncover the truth, Williams finds that Serena's looks, money, and talent, far from securing her future, made her a target.
B-Very Flat is available at: http://www.publishamerica.net/product89198.html.
Posted by Elspeth Futcher at 10:08 AM