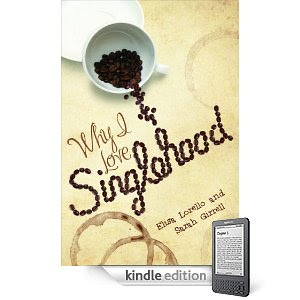 I'm a lone writer. But the writing collaboration of Elisa Lorello and Sarah Girrell with their new book Why I Love Singlehood proves that sometimes two heads (or pens) are better than one. I can't imagine having the patience or the grace to be able to write a book with someone else, but these two have managed it with aplomb.
As an added bonus, Elisa and Sarah are giving away a free e-copy of WILS to a randomly-picked commentator on today's post. So leave a comment!
Here's a peek into the evolution of Elisa and Sarah's writing relationship...
----------------

Sarah: Let me start from the beginning. I met Elisa my first week of undergrad. I was the one along the far wall of the room trying desperately to be unnoticeable. The magic started the moment Elisa had us all writing. It was brilliant. Not the writing, mind you. That was total crap. But somewhere in those first 75 minutes of class, Elisa gave us all permission to love writing as much as she did.

Elisa: Wait, I remember it differently. The one sitting in the back—that was true; but Sarah was also was the first one to approach me on the first day of class, shake my hand, and introduce herself—

Elisa: At least I thought that was you… After reading Sarah’s revised draft of her first essay, I knew she was something special—she got it.

Sarah: Flash forward three years—Elisa was my advisor for an independent study in writing style (which basically meant we got to schedule weekly time to geek out together about writing). And though I did my best not to show it, I wrote as if she were leaning over my shoulder, and revised like a madwoman before handing her a single sentence.

Elisa: Really? And yet all along, I was afraid Sarah was going to find out how little I really knew. But those weekly geek-out sessions really were fabulous.

I remember the first time I asked Sarah to critique one of my pieces. She looked at me, rather shell-shocked. And yet, she’s still one of the readers I trust most with my writing, even at its most suckiest stage.

Sarah: A year later I was living in her apartment during winter break, co-writing daily, and rationing out cookies as rewards for pages completed. Gone was the intimidation; all that remained was respect.

Sarah: Whenever asked about drafting Why I Love Singlehood another year later—

Sarah: I’d hastily add, “It’s okay, though, cause I’m co-writing it? And my friend, the uh, other writer? She’s already like, a published author.” As if that made me more legit.

Elisa: But here’s the thing: the writing process? It always worked. We were writers who engaged the craft of revision. We were constantly giving each other feedback, giving each other the credit when the writing worked, and taking the sole blame when it didn’t. We talked for hours on end about our characters, their hopes and dreams and fears and failures.

Sarah: We emailed, we google-chatted. The phone calls, when they happened, were epic. We’re talking max-your-minutes-in-one-call sort of epic. But mostly we wrote: questions, critiques, re-writes, snippets. We wrote more words about our novel than in it, and I think articulating it – literally spelling it out – made the writing stronger and the revising easier.

Sarah: Forty-eight grueling hours before our publishing deadline with Amazon Encore, we argued. We spent 45 minutes arguing over three words of dialogue—I can’t even remember which three they were—but we went head-to-head, round after round. In the end, neither of us got our way; the character won.

Elisa: Looking back, I’d say it was a defining moment. We began as student and teacher (although over the years she has taught me plenty), evolved into friends, and emerged as co-authors. Put another way, as a relationship revised.

Why I Love Singlehood
Eva Perino is single and proud of it. Owner of The Grounds, a coffee shop nestled in the heart of a college town, thirtysomething Eva cherishes her comfortable life filled with quirky friends, a fun job, and no significant other. In fact, she’s so content to be on her own that she started a blog about it: “Why I Love Singlehood.” Yet when she hears the news of her ex-boyfriend’s engagement, her confidence in her single status takes a surprisingly hard hit.

So begins Eva’s clumsy (and occasionally uproarious) search for love as she secretly joins an online dating site, tries her hand at speed-dating, and breaks her own rule by getting involved with one of The Grounds’ regulars. Soon Eva is forced to figure out exactly who—or what—is the true love of her life. Sparkling with warmth and wit, Why I Love Singlehood is a charming and insightful must-read for anyone—single or otherwise—who has ever been stymied by love.
About the Authors:
Elisa Lorello is the Kindle-bestselling author of Faking It and Ordinary World. Born and raised on Long Island, New York, she spent eleven years in southeastern Massachusetts before moving to central North Carolina, where she teaches and writes today.Sarah Girrell has a background in art history, writing, and rhetoric. After moving to Ithaca, New York to earn a medical degree, she and her husband returned to her native Vermont, where she is a physician and writer.Sarah and Elisa met at UMass-Dartmouth in 2002, where they quickly discovered a shared love of writing and a humor for everyday life.Why I Love Singlehood is their second collaboration and Sarah’s authorial debut.
Posted by Elspeth Futcher at 5:00 AM