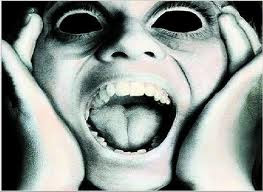 Spiders. Snakes. Dark alleys. Thumps in the middle of the night.
Scary things, yes, but nothing strikes fear into the heart of a writer more than...
THE MIDDLE.
The place where plots go to die.
The place where characters reveal themselves to be flat, unimaginative and straight-out dull.
It's a place from which you're sure you'll never escape.
Well friends, I've been to the middle and come out the other side. How, you ask?
First, let me say it wasn't easy. Second, let me say it wasn't pretty. There were colourful metaphors flung about. There were clenched fists. There was a finger sneaking toward the delete key.
But I escaped. By moving backward.
Let me explain. I knew my ending, so I wrote that. I also knew what had to happen right before the ending. Wrote that. I kept working my way backwards, step by step until I found myself back in the middle. I then discovered that I needed only a few scenes to bridge what I had written backwards to what I had written forwards. (if you understand what I mean).
So; my message today, is fear not the middle, gentle writers all. If I can find my way out, anyone can.
But, look out for spiders and snakes.
Posted by Elspeth Futcher at 9:13 AM